Millions were collected in this way, but without clear and precise data on how and where they were actually spent. According to data from the Ministry of Education and Culture, about 36,000 students attend secondary school in Republika Srpska, writes Gerila.info.

Illegal extortion of money from parents was sanctioned by contradictory articles of the law. In order to inform the public, we investigated who is responsible for a problem about which no one, apart from a few, has ever asked questions.

The provisions of Article 158 of the Law on Secondary Education of Republika Srpska stipulate that funds for the operation of schools are provided from the budget of the Republic, the budget of the local self-government unit and other sources. From the budget of the local self-government units, funds are provided for the material operations of secondary schools, that is, means for heating, electricity, water, means for hygiene maintenance, investment maintenance, stationery, communication services, procurement of certificates, diplomas, applications, and the like.

The same law stipulates that the education of regular students in public secondary schools is free.

According to the provisions of Article 161, paragraph 1 of the Law on Secondary Education of RS, it is prescribed that students provide funds for textbooks, manuals, student insurance, purchase of notebooks, personal equipment for work, transportation, and excursions.

The crux of the problem in the co-payment affair lies in the same article of the law, but in paragraph 3. Namely, this paragraph stipulates that the school can collect a co-payment from students at the beginning of the school year, and the funds will be used for: student insurance, purchase of certificates, diplomas, notebooks, and the like.

It is clear that certain obligations from paragraphs 1 and 3 are in conflict, bearing in mind that paragraph 1 stipulates that students themselves provide funds for student insurance and the purchase of notebooks, while paragraph 3 stipulates that the school can take money from students’ funds for the same purpose.

The Ministry of Education and Culture of RS confirmed that their recommendation is that the participation amounts should be up to 50 KM, but they point out that they have nothing to do with payment and control, but local self-government units, that is, municipalities.

Although co-payments are an item that is not from yesterday, no one has officially protested for years, which has enabled schools in Srpska to obtain millions on a basis that is not at all in accordance with positive legal regulations.

Miroslav B from Banjaluka, the father of a high school student, is outraged by the institutions and unclear legal acts which, he says, drive every normal person to madness.

"I am in shock, because this participation was paid to secondary schools for years. At the same time, despite this, money was constantly taken from the students on various grounds, and for painting classrooms, putting up blinds when it's hot, and the like, purchasing toilet paper, so the question arises, with reason, where did the money from the alleged participation end up all these years. Unfortunately, we all knew that, but no one asked questions where they should have been asked", asked the exasperated Banja Luka resident.

Ana S from Bijeljina also points out that in addition to participation, she often had to allocate money for other needs at the school her daughter attends.

"At the beginning of each school year, students and their parents are asked to pay 50 KM towards the participation fee. To what extent this was mandatory, the fact that students who pay it are publicly called out in the classrooms speaks volumes. To be honest, no one officially protested about it, although you could always hear in the corridors talking about what the money is being spent on and why, during the school year, they take money on other grounds, that is, the procurement of certain items that every school would have to to have", said Ana S for Gerila.

She adds that she is not surprised by the information that the participation was illegal all along, but that the citizens themselves are to blame, because they do not know their rights.

The schools are silent 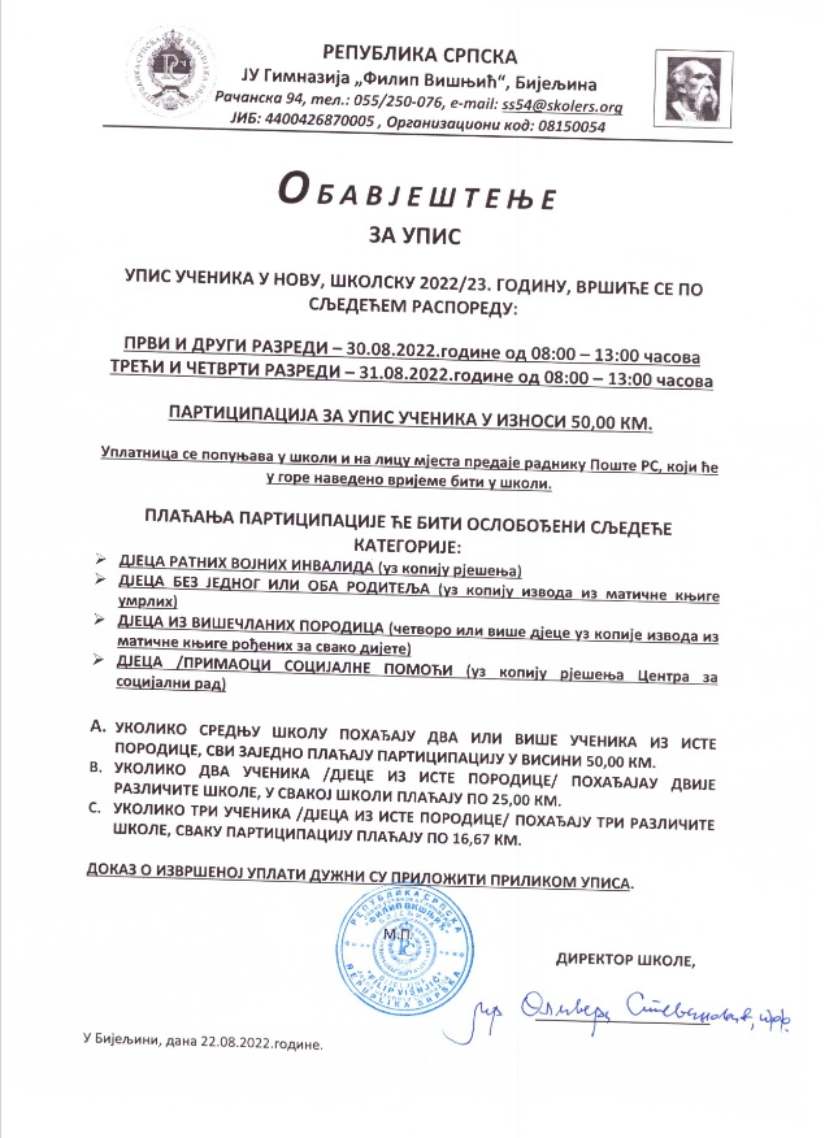 Although we sent questions to secondary schools from Trebinje to Banja Luka, we did not receive clear and precise answers about the way of spending the money received from participation fees, as well as the number of participation fees paid by students in their municipalities.

The only answer we received from JU Secondary School “Filip Višnjić” in Bijeljina.

"Data on the amount of participation, payment methods and procedures are published on the school's official website. The rest of the information you were looking for can be obtained from the competent services of the City of Bijeljina", it is stated in the short answer. 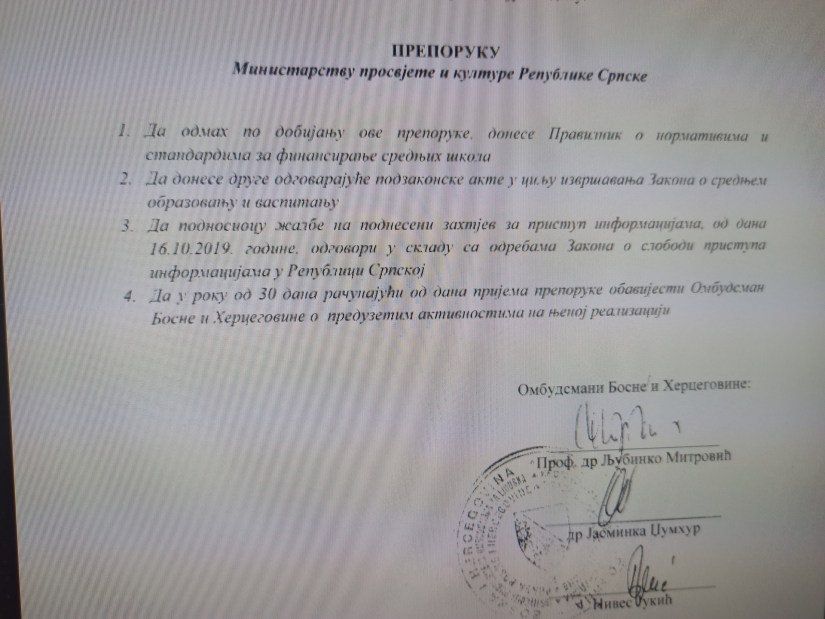 Dario Sandić, a lawyer from Banjaluka, started a legal battle about co-payments and received confirmation that they were illegally charged.

"According to my complaint, the Ombudsman of Bosnia and Herzegovina issued recommendation number Ž-BL-05-834/19, in which he found that the collection of co-payments in secondary schools is illegal, given that there is no act that determines the amount of this co-payment , and for what purposes the funds will be used. The Ombudsman ordered the Ministry of Education to pass a by-law that will regulate the issue of the amount of participation as well as its purpose, which the Ministry has not done even to this day", lawyer Sandić pointed out.

He adds that in everything there is another problem related to the misuse of money taken from students, as well as the lack of control over the use of these funds.

The answers to the request for access to information on secondary schools in Banja Luka, including the question of what purposes the funds from student participation were used for 2018, 2019, 2020 and 2021, were identical.

"The answers of all the schools were uniform, as if one person had written them, but not a single letter from the schools answered any of my questions. It clearly follows from this that something is wrong with the spending of money that schools have been illegally taking from students for years, and in terms of dedicated spending. I will certainly persevere in my intention to determine where, how and who spent the money, and to hold accountable those who acted illegally. This is another indicator that the holders of social functions in Srpska have neither morals nor ethics nor any scruples when they are able to take money from children. What is even more devastating is that this is done with the consent of the republican and city authorities, who should exercise control over those to whom they give money and to whom they are superiors, and not encourage them to engage in such illegal actions", concluded Sandić.

The Ministry of Education and Culture of Republika Srpska states that it does not have data on the amount of the stated amount, because the funds generated through participation are recorded in the Single Treasury Account of the local self-government unit to which the particular school belongs. The local self-government unit is obliged to provide a special purpose account with the school's organizational code, and to provide the school with unhindered disposal of the full amount of the paid funds that are in this account.

The school and the local self-government unit sign a contract on the amount of necessary funds provided by the municipality.

"The local self-government unit can ensure payment of the full amount or part of the costs through material costs. At the beginning of the school year, the school can collect a participation fee from the students, and the collected funds will be used for student insurance, the purchase of certificates, diplomas, notebooks and the like. In accordance with the recommendations of the Ministry, the participation fee is exempted from the children of war-disabled soldiers, children without one or two parents, children from multi-member families and recipients of social assistance. If two or more students from the same family attend secondary school, they all pay one participation fee", according to the Ministry of Education and Culture of the Republic of Srpska.

At the same time, the City Administration of Banjaluka does not have precise information about the funds spent, although the Mayor's Office was involved in the whole story.

"Bearing in mind the imminent start of the 2022/23 school year. We have requested an opinion from the Department of Finance on the generated income from student participation in secondary schools and the manner of spending, for the last 15 years. It is clear that the material and other costs of secondary schools are mostly financed from the City budget. Also, the decision that secondary schools charge participation from students is applied at the level of the entire Republika Srpska. The City of Banjaluka has already made significant efforts to help its fellow citizens in the form of support for mothers in labour, co-financing of children's stay in private preschool institutions, free transportation for children of families 4, free textbooks, etc. All of the above are great positive examples of good practice", according to the City of Banjaluka.

Attorney Sandić points out that the City of Banjaluka has not exercised any control over the use of funds collected on the basis of participation for the last 20 years.

"This money is paid into the budget account of the City of Banjaluka, and after that, the city transfers the money to the schools. However, the city has never, or for the past 20 years, controled the use of these funds, which by law can only be spent on: student insurance, purchasing certificates, diplomas, notebooks, and the like. When you take into account that students separately pay for insurance in schools and that they buy their own notebooks, then the question arises as to how much the school spends annually on certificates and diplomas, bearing in mind that 11 secondary schools annually generate an income of over 300,000 KM from participation. Knowing how school principals are elected to these functions solely on the basis of resident affiliation and/or suitability, as well as school board members who determine the school's expenditures and income through the budget, we can only imagine the creativity of these same principals when spending these funds for which no one seeks control or justification, "concluded Sandić.

CONFLICT WHO IS IT, INTEREST WHAT IS IT They are in the Mejlis, Lottery, Elektroprivreda and Autoceste, and they also want to be in power

On the lists of HDZ and SDA for the general elections, we find directors of public companies and schools, members of management boards, and the…

HOW THE MFA COVERED UP A SECURITY THREAT: A large group of “businessmen” from Pakistan disappeared after entering BiH

And while the state institutions imply in their unforced answers that Pakistanis are no longer in our country, a number of important questions…